GMB Northants
GMB Northants Community Branch is a very large branch with 2600 members in over 300 workplaces across Northamptonshire.  Many of our members work in small groups or by themselves which would mean that should they run into trouble with their employers they could be isolated and vulnerable.  We have a full time official for the branch, Rachelle Wilkins, based in the Peterborough office.  Rachelle is the regions lead officer for Asda stores.
The GMB is a general union and this is reflected in the Northants branch:
GMB Northants Community Branch has a network of over twenty workplace representatives. Eight members have been trained as accompanying reps so any member who has problems will get support even if there is no rep on site.
If you are interested in becoming a workplace organiser or accompanying rep please contact us. Full training will be given. 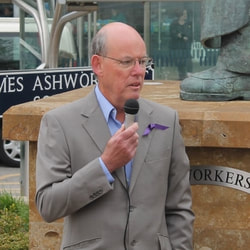 Gordon Glassford - GMB Northants
There are many threats our members are facing at work. More and more workplaces are using agency workers instead of employing and training their own people. There is also the threat of zero hours contracts. This is leading to lower wages and longer hours for many and puts increasing pressure on those workers who are lucky enough to have decent pay and conditions as employers, encouraged by the Tory government, seek to cut costs. You never hear of a company chief executive taking a pay cut or being forced to work longer hours
The GMB Union is one of the main backers of the labour party and we are very active in the county. The Tories have proved themselves to be totally incompetent and are only interested in fighting among themselves. It looks like one final push will finally get rid of them. The GMB is ready for the challenge
Never has it been more important to be a member of a strong union that puts its members first.​

That union is the GMB. You can join the GMB HERE