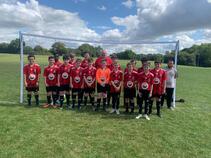 Here are the current under 13 squad and coaches for Corby Warriors Vikings that GMB Northants are proud to sponsor. 2020 is our second year of supporting this local youth football team and we are delighted we can help out with their kit

GMB Northants are pleased to support Food Banks in Northamptonshire on an ongoing basis with regular quarterly donations, if you are a foodbank in Northants do please get in contact with us. We currently donate to the following foodbanks:

Corby Foodbank works with Trussell Trust and is based at the Hope Centre, 8 Princewood Road in Corby

Wellingborough and District Foodbank, part of the DayLight Centre at Queens Hall, 8 High Street in Wellingborough

The Daventry Foodbank is is based at the Vineyard Centre, 23 High March Close on High March Industrial Estate in Daventry

Towcester Foodbank works with Trussell Trust and is based as St John Ambulance, Islington Road on Towcester

GMB Northants are pleased to be able to support Kettering Home-Start who help families with young children deal with whatever life throws at them.

GMB Northants has affiliated to Justice for Colombia  a British NGO that campaigns for human rights, workers' rights and the search for peace with social justice in Colombia. We continue to support them each year with membership and a donation

We are pleased to be supporting the Alzheimer's Society with donations on behalf of GMB Northants branch members.

At our July 2020 meeting we agreed to make a donation to the Disasters Emergency Committee CORONAVIRUS APPEAL: Millions of lives are at stake as Covid-19 hits refugee camps and war-torn countries like Yemen, Syria and South Sudan. Help families fleeing conflict face a deadly new threat.

GMB Northants are proud to support Corby Nightlight a a registered charity, which was set up to prevent and/or relieve poverty among rough sleepers and other homeless adults in Corby and surrounding areas

GMB Northants affiliates with The Labour Research Department which exists to co-operate with Labour, Socialist and Co-operative movements in promoting and carrying out research into problems of importance to the labour, to supply information, and to issue publications.

GMB Northants are affiliated to War on Want who work to achieve a vision of a just world, through our mission to fight against the root causes of poverty and human rights violation, as part of the worldwide movement for global justice.

GMB Northants are affiliated to the Nicaragua Solidarity Campaign who work in solidarity with Nicaraguan organisations and social movements fighting for social and economic justice by promoting and seeking support for their activities in the UK.

GMB Northants were pleased to make a donation to Freedom for Torture who help survivors of torture to find their voices again and to rebuild their lives.

At the annual Workers Memorial Day Commemorations event in Corby April 2017, a cheque for £1525 was presented to  June Hancock Mesothelioma Fund on behalf of local unions and organisations 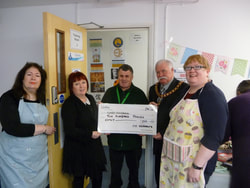 Following the event the branch agreed that Foodbanks were an important community service and that GMB Northants would support other Foodbanks in Northants including Kettering St. Judes, Daventry, Restore Northampton, Wellingborough, Spencer Northampton, Corby, Towcester and Irthlingborough Foodbanks on an ongoing basis.

We have made donations to the Disasters Emergency Committee for the work they have been doing in Syria helping refugees and in the Philipines helping the typhoon survivors.

We also make regular donations to the Kettering Childrens Holiday charity,  Kettering Centre for the Unemployed and Coronation Park in Corby.

On top of all this we are affiliated to the National Pensioners Convention, , Labour Behind the Label , Labour Research  and Amnesty International

GMB Northants Community Branch are always looking for worthwhile causes to support so if you know of any please let us know.